“Why do you call him a monster?”
“Well, an eight-foot tall green gorilla with web feet and bug eyes—what would you call him? A well-developed frog? Not exactly an Ivy-league type, anyway.’”
“I’ve met plenty of Ivy-leaguers I’d call monsters.”

Rachel Ingalls’ cult classic Mrs. Caliban is the perfect read for a rainy afternoon. I read this book partway through my practicum with grade eight English students in March and I reread it this past weekend. Sitting at my favorite local coffee shop with a much needed americano, I took this little book out of my bag and dug in. About an hour and a half later, I resurfaced, my coffee long since cold. 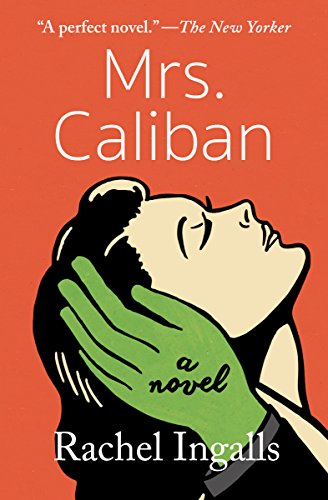 Mrs. Caliban has just been reprinted, largely due to the success of Guillermo Del Toro’s cold war film The Shape of Water, but that doesn’t mean that Ingalls is lacking her own audience. Mrs. Caliban has a large cult following that landed the book on BBMC’s “top 20 American novels of the post-World War II period.” The sudden resurgence of interest can probably be attributed to the film, but we can all agree that Ingalls created this unique narrative first when she published this novel in 1982.

In Mrs. Caliban, we meet Dorothy who is unhappily married and living in a suburb where she washes dishes and awaits her husband’s return at the end of each day. One afternoon, she hears a radio announcement that a sea creature has escaped from the Institute for Oceanographic Research. Everything changes for Dorothy when the 6’7 lizard man walks into her kitchen after killing his captors. He introduces himself as Larry and the two begin a tumultuous love affair that ends in the destruction of relationships, property and life as Dorothy knew it.

The title alludes to one of my favourite Shakespeare plays The Tempest in which Caliban is a half human, half monster who has long been a symbol of colonial oppression. His name is also an anagram of the word ‘cannibal’ furthering his status as a monster. Placing Mrs. Caliban within the context of The Tempest, we begin to see the alienation and othering of Larry (and Dorothy by association) as an extension of patriarchal and institutional oppression. Larry was meant to be used as a weapon, but instead he finds Dorothy and seeks shelter from his destined role. Through Larry and Dorothy’s relationship, Ingalls criticizes gender roles, the marriage institution and the media with her lizard man at the epicenter of conflict. She leaves it up to the reader to decide whether Larry is real or a figment of Dorothy’s imagination, brought on by boredom and frustration with the patriarchal world she occupies. To be completely honest, I’m still not sure.

I won’t spoil the ending, but after murder, explosions and a surprisingly tender love story, Mrs. Caliban is a book I’ll return to again and again.

Add my books to your Goodreads!